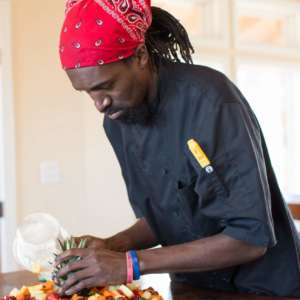 Ilbersalle Fallon is no stranger to the food service industry; Graduating from the Orlando Culinary Academy, Fallon has been working with food over the last 16 years. His passion lies in merging his creativity and talent with food in a way that nourishes and draws people together. Fallon has worked in fine dining restaurants as well as casual cafes, providing creative cupcakes, delicious wraps, and much more to the food community here in Austin, Texas. He began Niella Catering in 2014, which specializes in traditional catering as well as creative food activities ranging from Film Shoot Craft Service, Romantic Picnics and Personal Chef Services.

Fallon eagerly jumped on board with his role as Operations Coordinator at the Cook’s Nook when he met Joi Chevalier at a potluck that included several African-American service industry individuals actively engaging in Austin’s community. Fallon’s role as Operations Coordinator includes maintaining day-to-day kitchen operations and client intake for The Cook’s Nook. He is also in charge of handling prospective member visits, scheduling and walks through new client inspections with the city and helps to ensure the production area’s ongoing operation, spot maintenance and cleanliness. Fallon’s goals are to provide the success of The Cook’s Nook by handling his operations smoothly and continuing to cultivate The Cook’s Nook as a place for its members to thrive, share their ideas and ignite their culinary spark. On top of building his brand and passion for food, Fallon is also a poet, a spoken word and film enthusiast. He remains active in the city’s film community as well as the poetry scene in Austin and Houston, Texas.