On Monday, August 24th, Joi had the opportunity to sit down with Marcus Samuelsson to discuss his company, his career, his new book, his restaurants, and his community. Yes, there are a lot of commas in that sentence, but they were able to cover so much ground in a half-hour interview.

Who is Marcus Samuelsson

As you know, a chef’s background wholly effects their perspective on food. He was born in Ethiopia and grew up in Sweden. He arrived in New York in 1994 to work at Restaurant Aquavit, specializing in Scandinavian cuisine. The following year, he was head chef. Since then, Marcus has published 8 books (one on the way), opened several restaurants, and partnered with several companies to bring his style of cuisine to a variety of audiences. As a celebrity chef, you may have seen him on cooking competion shows such as Top Chef or The Taste.

When asked about how he was able to grow from chef to brand, he explained, “As all of us, we’re all on a journey.” In the interview, he discusses learning what it was like to be a chef in America, a Black chef in America, and to grow as a man. Between the time he started at his first restaurant until the time he developed Red Rooster in Harlem, he had to grow as a human being – as a man. So, by the time he moved to Harlem and began to develop Red Rooster, he had an idea of the food he wanted to create, the community he wanted to be a part of, and the story that he wanted to tell.

When asked how he maintains his value system as a business owner, Marcus explained that his point of view is “what can we create that was not out there for me when I started”. As an entrepreneur, owning 13 restaurants, publishing 8 books (one on the way), and creating several events, Samuelsson builds his brand around how he can be of service by creating for others by filling a void.

Similar to how The Cook’s Nook supports the community by supporting entrepreneurs, and then pivoted to fill a void during the pandemic, Marcus used his platform to do the same thing. During the interview, Marcus is candid about how community affects his decision making. His mom advised him to “Cook in the community that you feel the best in.”. With his businesses, he has an opportunity to connect with the Harlem community, the food community, as well as reflect his various background influences. He created Harlem EatUp! to shine a spotlight on the iconic Harlem community, its small businesses and restaurants. In 2020, during the pandemic, he shifted the focus to support BIPOC-owned Harlem businesses as well as raise funds to benefit non-profits that serve Harlem, its residents in need and its businesses.

You can catch the entire interview on Instagram Live. 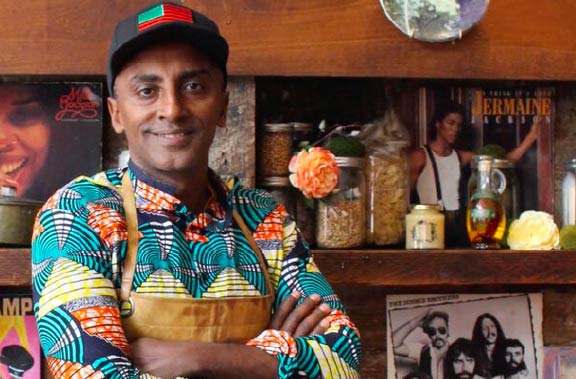